After a mother and her ten-year-old daughter are found raped and butchered in their apartment, Stabler and Beck take in a homeless man who turns out to be Munch’s uncle, Andrew. Initially he’s their main suspect until they find their way to a new suspect. Unfortunately, when their only evidence against Brent Allen Banks is thrown out in court, Andrew, suffering from mental illness, goes too far trying to do what he is convinced is the right thing. [ Recap available. ] 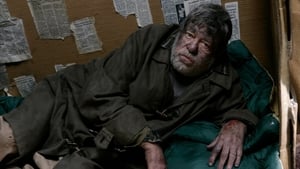